There are people who don't like Vegemite, a minority of the population detest peas, and then there are those (like me, or is it just me?) who aren't particularly fond of beetroot. But I bet everyone (by that, I mean most people in general) loves teriyaki sauce. It's like a sweet soy-based barbecue sauce that goes with almost anything. The kids in particular enjoy having it with either grilled salmon or chicken, served with steamed rice. This time, I decided to make mini teriyaki chicken burgers (sliders) using round dinner rolls that I bought from the Vietnamese bakery. The size of these rolls are ideal for little hands and it makes me beam with joy when the kids ask for seconds (they love 'em!). These buns are actually really good, because they are similar to the ones used for Vietnamese pork rolls, which have a thin and flaky crust on the outside, with a light and fluffy interior. 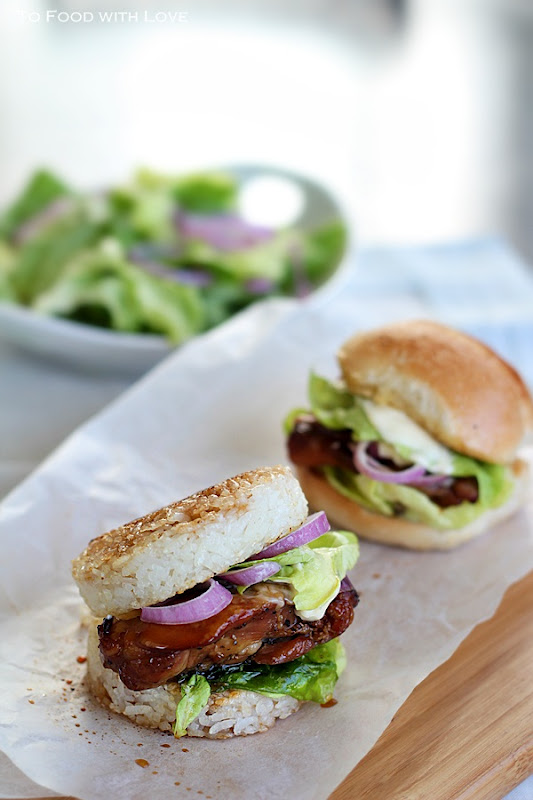 I made two versions of these teriyaki chicken sliders - one using dinner rolls, and the other using rice cakes. The rice cakes are basically sushi rice (calrose or short-grained rice) which have been cooked and compressed into rice cakes. I used an egg ring to mould and compress them into shape, with the aid of cling wrap. They are similar to grilled onigiri (see Nami's recipe here) except that I've shaped them differently. Then I simply grilled them in a lightly greased skillet, followed with a light glaze of teriyaki sauce over the top which I grilled again until lightly charred.

The rice burgers are assembled by sandwiching it with grilled teriyaki chicken (see recipe here) which I then brushed with extra teriyaki sauce, and topped with lettuce, red onions and mayonnaise. It was delicious, regardless of the fact that it was a little fiddly and messy to eat because the chicken fillet kept sliding off the rice cake. Wrapping the burger in some greaseproof paper helped to hold it together a little. Next time, I would probably substitute the chicken thigh fillets with meat patties instead (click here for teriyaki meatball recipe which you can shape into meat patties to make these burgers). Otherwise, just serve the teriyaki chicken on classic dinner rolls (I grilled these buns in the pan to crisp and warm them up) - quick, simple and equally delicious! 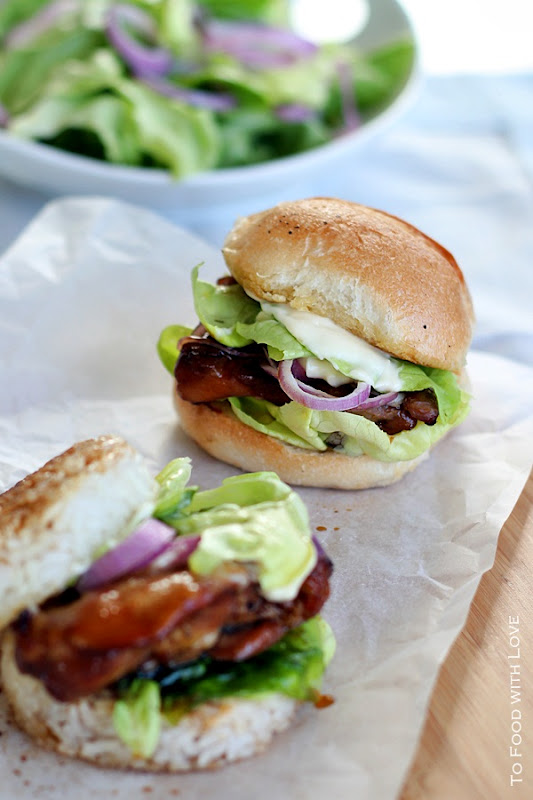 Thanks for leaving your comments on my blog. Feel free to provide any feedback or ask any questions and I will try to respond as soon as possible.